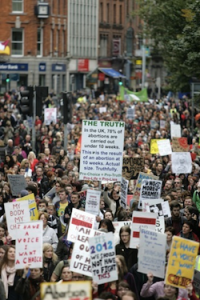 On September 28, women and advocates will be mobilising in more than 50 countries to call for an end to discrimination of women and girls, end stigma around abortion, and to demand governments to uphold, protect and fulfil women’s right to safe and legal abortion.

Various activities are being organised by sexual and reproductive rights organisations and women’s advocacy groups in all continental regions- flash mob in Indonesia, Embassy visits in Latin America, pro-choice picnic in New Zealand, silent march in Kenya to dialogues with parliamentarians in Poland- all in observance of the September 28 Global Day of Action for Access to Safe and Legal Abortion.

The September 28 Day of Action was observed in Latin America and the Caribbean for 20 years by women’s groups before becoming a global campaign in 2012, in recognition of the fact that unsafe abortion is an issue for many women in developing countries and increasingly in the Global North as the rise of religious, political and economic extremisms result to restrictive measures that prevent women from accessing safe and affordable abortion services.

“We need to address the issue of unsafe abortion, if we want to address the high rates of maternal mortality, otherwise all efforts to achieve the Millennium Development Goal 5 will remain fruitless. Criminalising abortion will not stop it, but will only force women to seek underground and unsafe operations that will not only put their health at risk, but their lives as well,” says Kathy Mulville, Executive Director of Women’s Global Network for Reproductive Rights (WGNRR), one of the organisations spearheading the campaign. Being forced to resort to unsafe abortion does not only endanger women’s health and lives, but subjects them to stigma, discrimination and in extreme cases, long-term imprisonment. “What is needed is the political will on the part of the governments to ensure the right of women to decide on all aspects of their reproductive health, including the right to choose whether to continue or end pregnancy,” she added.

Sexual and reproductive health and rights (SRHR), including access to safe and legal abortion is a human right, as referenced in the CEDAW, Maputo Protocol, Beijing Platform for Action and other international standards that affirm women’s right to choose to protect their right to life and bodily integrity and autonomy.

With the expiration of the MDGs two years from now, WGNRR and various SRHR organisations are pushing for the inclusion of SRHR in the post2014/2015 agenda as central to achieving social justice, gender equality and equity and sustainable development. As articulated in the September 28 Manifesto, the definition of SRHR in any future development agenda, should go beyond “maternal healthcare” and “reproductive health” but should cover a broader range of issues such as pleasure, access to contraceptives, women’s empowerment, equality, sexual orientation and gender identity and abortion rights.

According to the International Conference on Population and Development (ICPD) preliminary findings in June 2013, governments with the most restrictive abortion laws also registered the lowest commitment to “prevention and management of the consequences of unsafe abortion”. Most of the countries with severe abortion laws are in the Global South.

In addition to the different country mobilisations, there will also be a tweetathon to bring the abortion discussion out in the open (hashtags #sept28 and #safeabortion), a Manifesto and a global selfie campaign that culminated in a virtual mural that visually represents people’s thoughts and feelings on abortion from all over the world.

There will be a live feed of all the various actions on this site.

The September 28 Global Day of Action for Access to Safe and Legal Abortion is spearheaded by the Women’s Global Network for Reproductive Rights, Campagna 28 de Setiembre, the International Campaign for Women’s Right to Safe Abortion, Asia Safe Abortion Partnership, ASTRA, Ipas and other global and regional partners.