September 28, Global Day of Action for Access to Safe and Legal Abortion 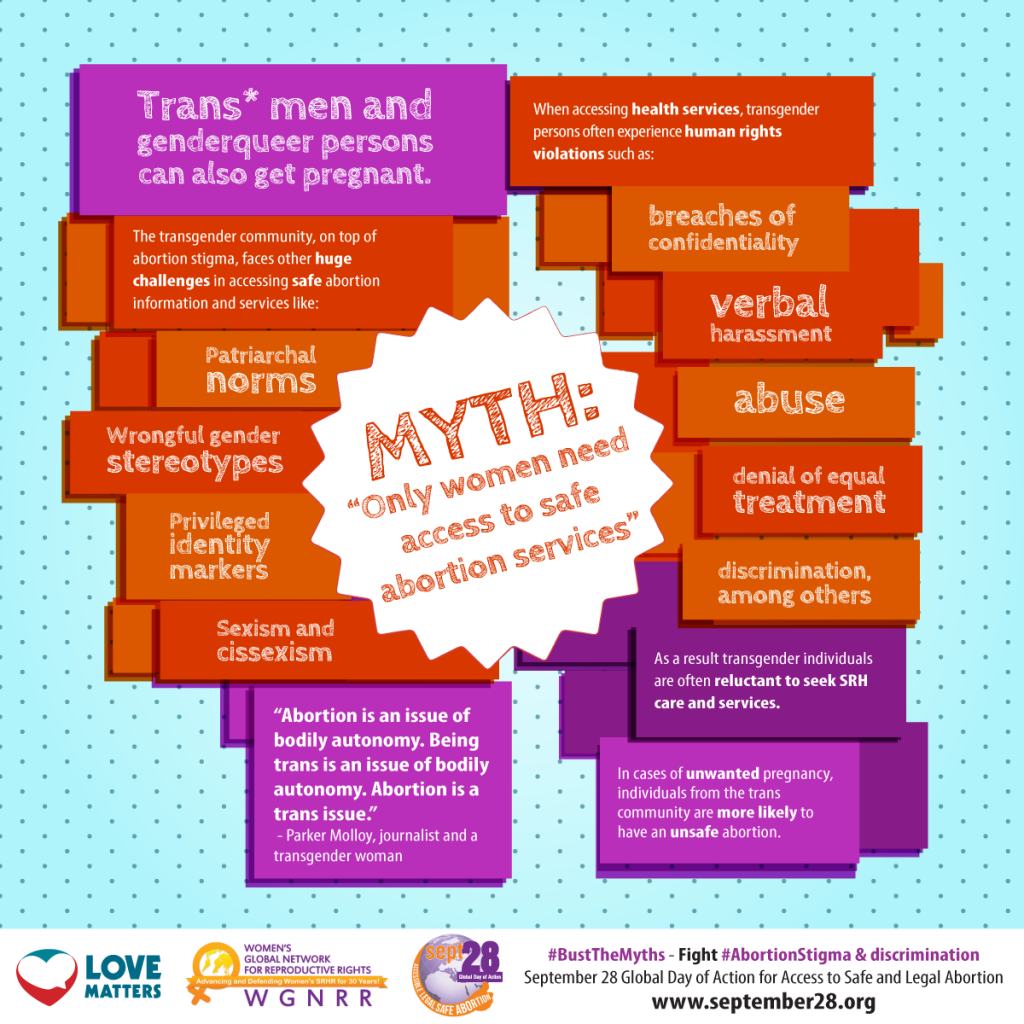 People who may need access to safe abortion services are not only cis-women.[1] Trans-men, gender queer and gender-non-conforming persons, as well as others of diverse gender identity who do not identify as women, can and do get pregnant.[2] It is therefore not only cis-women and girls who over the course of their lives may need and/or seek an abortion.[3] Individuals of diverse gender identity, however, face extensive challenges in accessing safe abortion information and services, a result not only of the stigma surrounding abortion itself, but additional barriers they face in realizing their sexual and reproductive health and rights (SRHR).

“We must acknowledge and come to terms with the implicit cis-sexism in assuming that only women have abortions.”Lauren Rankin, Truthout[6]

In many countries, transgender persons face particular difficulties in accessing healthcare services,[7] especially regarding their sexual and reproductive health (SRH). Clinical guidance for healthcare providers has traditionally been silent and/or non-existent on the healthcare needs of transgender individuals, particularly concerning the provision of contraception, abortion, and other SRH services.[8] In turn, transgender persons’ experiences with the healthcare system are often negative, with healthcare professionals being uninformed, biased, and insensitive, frequently lacking the necessary professional training to meet the needs of transgender persons, and in some cases refusing outright to provide care.[9] [10] [11] Homophobic, sexist, and transphobic practices and attitudes on the part of healthcare institutions and personnel also often result in transgender persons experiencing human rights violations in healthcare settings, including breaches of confidentiality, verbal harassment, abuse, denial of equal treatment, discrimination, further stigma, and the risk of violent reprisals, as noted by human rights bodies, among others.[12] [13] [14]

As a result, transgender individuals are often reluctant to seek and/or will intentionally avoid SRH care and services.[16] [17] In cases of unintended or unwanted pregnancy, in turn, individuals from the trans community, have an increased likelihood of undertaking clandestine and/or unsafe abortions, as compounding stigmas limit their ability to access safe abortion information and services.

With these realities in mind, it is imperative that we challenge abortion stigma, not only because it compromises the health, wellbeing, and rights of cis-women and girls, but also of those who already fall perilously into the margins when it comes to realizing their SRHR.

This September 28, join us and #BusttheMyths surrounding abortion, demanding the right to access safe and legal abortion services for any and all individuals who may need them.

[1] A “cis-woman,” shorthand for “cis-sexual woman” or “cis-gender woman,” is a woman whose assigned gender is female, and whose assigned female gender is more or less consistent with her personal sense of self.  Definition borrowed from About.com Civil Liberties.

[3] Rankin, Laura (2013), Not Everyone Who Has an Abortion is a Woman – How to Frame the Abortion Rights Issue.

[5] “Cis-sexism” can be understood as a set of attitudes and behaviours which value and normalize people who identify with the gender they were assigned at birth, while keeping transgender and gender non-conforming people invisible or treating them as inferior, unnatural or deviant. Definition borrowed from Dr. Eric Anthony Grollman (2012), What is Transphobia? And, What is Cissexism?

[6] Rankin, Laura (2013), Not Everyone Who Has an Abortion is a Woman – How to Frame the Abortion Rights Issue.

[10] Report of the United Nations High Commissioner for Human Rights (2011), Discriminatory Laws and Practices and Acts of Violence Against Individuals Based on Their Sexual Orientation and Gender Identity, A/HRC/19/41, para. 56.

[15] Chastine, Cheryl (2015), Cisgender Women Aren’t the Only People Who Seek Abortions, And Activists’ Language Should Reflect That.

[17] The American College of Obstetricians and Gynecologists (2011), Health Care for Transgender Individuals.

[18] Chastine, Cheryl (2015), Cisgender Women Aren’t the Only People Who Seek Abortions, And Activists’ Language Should Reflect That.