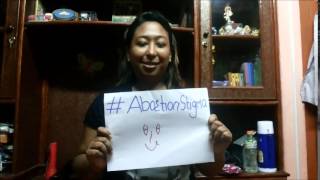 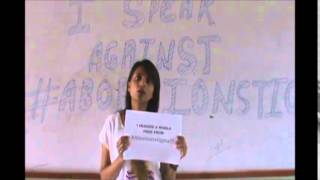 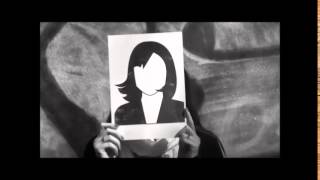 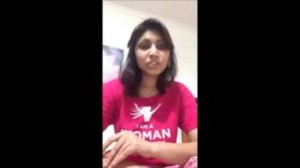 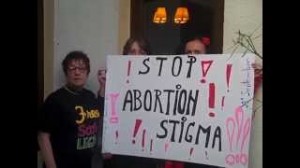 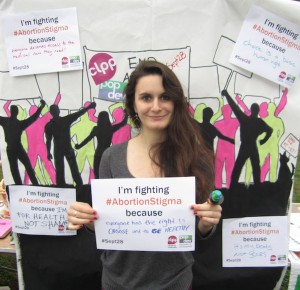 Women need choice. We need to choose to be a mother, to choose to wait a few more years before having children, to choose adoption, to choose to try again when ready, to choose not to be a mother. It should not be taken from us nor someone else’s ideas forced upon us. This choice has to be respected and and allowed without repercussion.I had an abortion. My choice. – Ethel, Ireland

As Prochoice i believe that access to safe abortion service is the basic fundamental human women right and women should be able to access this life saving service without being subjected to fear and shame. –  Smriti, Asia Safe Abortion Partnership (ASAP)

AS FUTURE PROVIDER I WANT TO PROVIDE A SERVICE WHICH IS FREE FROM DISCRIMINATION – Hemlata Chaudhary, Nepal

Portugal have legalized pregnancy interruption, since 2007, cutting the spiral of problems linked to illegal abortion such as serious health damage and even death of young and older women. All important social policies should be cherished but also replicated as good practice, as an example to follow by other countries. – Isabel, SERES (con) viver com VIH, Portugal

Reproductive choice can be the only thing that stands between a woman and DEATH. Women who face deadly consequences of a pregnancy deserve to choose to live. – Hina Shehzadi, Shirkat Gah, Pakistan

There should be no criticism of abortions-safe abortions are a basic human right as is contraception.- Pam Wortley, DWCA, Uniter Kingdom

Access to safe and legal abortions isn’t just a healthcare issue – it’s a human rights issue! No one should come between a woman and her bodily autonomy. – Meg, Canada

Every girl and woman is capable of choosing what is best for her at any time, situation and place in her life. Abortion is just one of them. Look ahead and leap forward! – Malavika Thirukode,  International Planned Parenthood Federation – South Asia Regional Office, India

Women has right to sexual health so they totally have right to decide whether they want to keep or get abortion. – Le Hoang Minh Son, Hanoi School of Public Health and Center for Creatives Initiatives on Health and Population, Vietnam

I believe it is the right of women to choose her time of fertility . To decide and Make her choice on family planning.  – Monique Kamat, Family planning Association of India

I believe that a woman has the right to choose what happens to her body and that the world loses too many young women full of hopes and dreams because of unsafe abortion simply because of where that woman happens to live, the colour of her skin or how much money she has. –  Rebecca Davidson, Canada

With the Medical Termination of Pregnancy (MTP) Act coming into effect in 1972, India conveyed a strong message that it cared for the health of pregnant women who wanted to safely terminate their pregnancies. Yet, even four decades later, many women are still unaware that abortion is legal. Even access to safe abortion centres is severely restricted, especially in rural areas. As a result, there is a great mismatch between the number of abortion seekers and MTP-certified providers and centres. – Mukesh Surve, Family Planning Association of India, India

Its sexual and reproductive right of woman, she should decide to continue with pregnancy or terminate it. – Kshama, Family planning association of India

No person should feel shame about their reproductive decisions. Bodily autonomy must include respecting the needs and lived experiences of other human beings. – Morgan Healey, Abortion Law Reform Association of New Zealand (ALRANZ), New Zealand

The decision to end a pregnancy is difficult enough without added social shame and physical danger. – Erica Harris, Canada

No other medical procedure is so stigmatized. Why the prejudice against abortion? Just because it is a matter of women’s sexual and reproductive health and well-being? #abortionstigma = misogyny. – Asilata, India

I believe that every woman has the right to decide whether or not she wants to bring a child into the world because she knows if she will or will not be able to give the child the upbringing it deserves. – Ishita, India

I am more than my ovary. I am not determined by my body: I love and dream and desire, my will determines my life. – Francesca Vidotto, Italy

Women have the right to not be pregnant if they do not wish to be. – Michele Ren, USA

I believe in our ability and right to decide. –  Fernanda, Mexico

Girls and women should have the right to choose and have control over their own bodies. – Teresa Johnson, Australia

I know how incredibly difficult it is to be a mother even when you want to be one. A child needs to be wanted, kept safe -(really:who would rape a 9-year old girl?)- well fed, educated – the list goes on!
A woman who knows that she is not able to provide the above to a child must have the right to a quick, safe and pain-free abortion.  – Sonja Sundqvist, Canada

It’s every woman’s right to choose.
The example of nine year old Lourdes also highlights the needs to legalise abortion as necessary to assist  woman and children who have unwilling became pregnant due to abuse and assault .

I would also further add that hopefully the perpetrators of these sexual assaults against children and women are dealt with by the authorities of spoke countries. – Sharon Braybrook, Australia

The stories about young girls having no choice are not stories to them. –  Kat Chilvers, UK

It woman must have full right to decide of her body, including a fetus, up until the moment a baby is born. – Carl Tornell, Belgium

To make the decision of not having a baby is as responsible and difficult as making the decision to have it.  Why that desicion is made is up to every person. You can be advice, you can be guide, but you cannot be force or be judge.

In our physical nature are the conditions to create life, but is in our own rationality and counsciousness where the social aspects of our life are to be evaluated and where the desicion to commit or not with the raising of a new person must be defined before that person comes to life. – Ricardo Moreno, HappyCitizens.org, Colombia

I believe women should have a right to decide about their own body. – Alexandra, Ireland

I am against #AbortionStigma because it is against non-discrimination laws that prohibits discrimination of any form on basis of gender, sex, health, identity, reproductive rights… #sept28 – Zoneziwoh Mbondgulo Wondieh, Women For A Change, Cameroon

If you have an abortion and feel ashamed, hide this within you for many years, because you feel unworthy, it is much more damaging than if you make a choice and are able to be at peace with the decision to have an abortion. – Thelma Bogante, ARCC, Canada

We are the owners of our bodies and no one should be entitled to impose their decisions or opinions on us or to tell us what we should do with them. Abortion or no abortion, it should be us who decide. Forcing a child to be a mother at 10 it is a far greater crime than removing a bunch of cells that form an embryo.  – Oana Tegzes, Romania

Having a baby is a matter of being ready to give him/her all he/she needs to have good chances in live. And this needs more than a pregnant body. It needs parents to be ready to be parents. – cyw, Belgium

Because we want India as a planed and healthiest country. – Rajashree Bose, FPAI Kolkata Branch, India

With the Medical Termination of Pregnancy (MTP) Act coming into effect in 1972, India conveyed a strong message that it cared for the health of pregnant women who wanted to safely terminate their pregnancies. Yet, even four decades later, many women are still unaware that abortion is legal. Even access to safe abortion centres is severely restricted, especially in rural areas. As a result, there is a great mismatch between the number of abortion seekers and MTP-certified providers and centres.

Women shouldn’t be ashamed (or made feel ashamed) of standing up for themselves and making their own choices. That’s what pro-choice activism is about: the belief that women can make their own decisions. – Marie-Lise Drapeau-Bisson, Canada