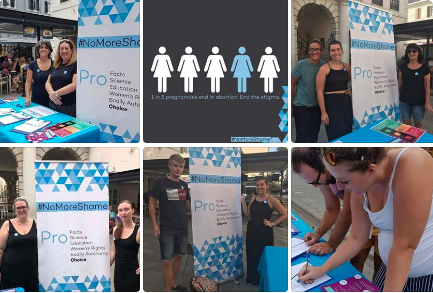 Activists in Gibraltar have launched the “No More Shame Campaign” with the purpose of getting some media attention on the abortion laws in the British colony on the southern tip of Spain.

Abortion there is still illegal and can get women a life time in prison. If abortion is needed, women need to travel to Spain or the UK to terminate an unwanted pregnancy, they need to cover their own costs and have no access to follow up appointments or help. The morning after pill has only just been made available over the counter in some pharmacies, and a medical prescription is needed to buy contraception.

Activists are working hard to have these laws changed and are also working towards, comprehensive sexual education, and mental and physical help during/after an unwanted pregnancy.

Gibraltar is a small place (30,000 population) and the church is still a powerful force.So the laws are put in place to please the Christians views on women’s reproductive rights!

The opposing party “pro life Gibraltar” are even going as far as trying to push the government to penalise women who seek abortions in Spain or UK.

This has resulted in increased fear from women who have had abortions, afraid to speak up, but activists and defenders are joining forces and planning great activities for September 28:

They have been gathering at the “Piazza” to collect signatures for a petition, to give out sexual health info leaflets and to promote services who have agreed to support women going through a crisis pregnancy.

Black Tee shirts with #NoMoreShame strapline are sold, for £10 each.

Thurs 27th September as from 10am – Piazza, they will celebrate International Safe Abortion Day and the launch that day of the GHA’s new sexual health clinic (they’ll be in Casemates)
Wed 3rd October – Piazza
Tues 10th October – Piazza
SATURDAY 13TH OCTOBER – silent march from Casemates to No. 6 starting at 11am. Silent as in solidarity for all the women who have had to remain silent, shamed and stigmatised for far too long. Everyone is encouraged to wear something saying “No More Shame” and to bring a banner of some sort. All groups supporting the PRO-CHOICE movement are encouraged to attend: Unite the Union, ERG, Secular Humanists, Choice Gibraltar, Together Gibraltar and any others… The more the merrier!
Mon 15th October – Piazza
Mon 22nd October – Piazza