At 1.8 billion, young people aged 10-24 are currently the largest youth generation in human history, 90% of whom live in developing countries.[1] Many of these married or unmarried young people are engaged in sexual activity, whether forced or consensual. Access to sexual and reproductive health (SRH) services has thus been increasingly recognized as critical for the health and overall wellbeing of young people. However, despite international commitments[2] and recommendations of human rights bodies,[3]young people still face a myriad of barriers in accessing SRH services, including access to safe abortion.

Many barriers to SRH services stem from the stigma associated with young people’s sexuality, as being sexually active before a certain age or outside marriage in many countries is often frowned upon, criticized, or even condemned. As such, the fear of shame, discrimination and public exposure often stops young people from accessing SRH services. Furthermore, young people in different countries have reported being turned away from such services, humiliated and shamed by healthcare providers for engaging and/or thinking of engaging in sexual activity, and being accused of “immorality” and eroding “traditional” values.[4][5] 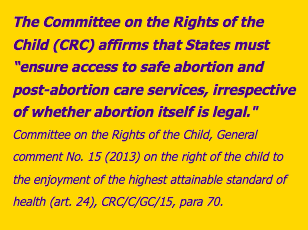 and even death. As a result of having little or no access to SRH information and services, young people experience unintended or unwanted pregnancies, as well as a heightened risk of sexually transmitted infections (STIs) and HIV.  Because of the intersecting stigmas surrounding both youth sexuality and abortion, in turn, when faced with an unintended pregnancy adolescent girls and young women are more likely than adults to delay undertaking an abortion, resort to unskilled persons to perform it, use dangerous methods, or put off accessing health services when complications arise.[6]

The stigmas surrounding youth sexuality and abortion are further exacerbated by legislators issuing laws and regulations requiring parental and/or spousal consent for youth to access SRH services, including abortion, placing such services even further out of reach for young people. As a result, every year 3 million adolescents girls and young women aged 15-19 have unsafe abortions, which account for 40% of all unsafe abortions worldwide, making unsafe abortion a major contributor to mortality rates and long-term health problems among young people. [7][8]Forced pregnancy violates young people’s human rights and places their physical and mental health and wellbeing at great risk. Governments can and must take action to challenge and address the stigma surrounding young people’s access to safe abortion, and fulfill the right of all young people to have access to confidential, sensitive, and high-quality information and services for pregnancy termination, free of marital and/or parental consent requirements.

That young people in the 21st century continue to be forced to needlessly jeopardize their health, wellbeing and lives is deplorable and unjustifiable.  As such, join us this September 28 in calling on governments, legal institutions and UN agencies to eradicate stigma and misinformation surrounding abortion and young people’s sexuality, and fully ensure young people’s human right to safe abortion!

Click here to view the FULL TEXT of the campaign alert